Closing Plenary – Preparing for Montreal in 2014

Scientific Committee Chairs Delia Rodriguez-Amaya and Rickey Yada hosted the Closing Plenary Session to end the 16th IUFoST World Congress here in Iguassu Falls, Brazil. With this Congress coming to an end it was only appropriate to recognize the events to come. ‘Looking Ahead’ with Past President, David Lineback, the future will involve further ‘Collaboration’ between all facets of Food Science and Technology. David Lineback highlighted the fact that it will take a collaborative effort of Academia, Industry and Government to continue progressing into the future. With that progression, there has to be an understanding of the successes and challenges that this past Congress faced in terms of ‘Food Security and Wellness’ and see and understand what can be added, developed and pursued.

“There has to be continuity with all the activities of IUFoST if we really want to combat the issues of the world, we have to keep working continuously and harmoniously.”

“Countries need to build upon their own capacities to create strategies by country rather than by institution.”

Special acknowledgement must be given to the Congress organizers who have provided a model of success in showcasing the Young and Distinguished Scientists and Technologists. Initiatives focused on creating greater bonds between academia, industry and governments will proceed as preparations continue heading into the 17th World Congress in Montreal, Canada in 2014. 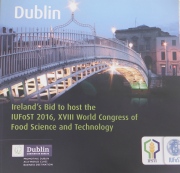 The President of the Institute of Food Science and Technology of Ireland (IFSTI), Rory Ryan won his Institute’s bid to host the 18th World Congress in 2016. The Congress will take place from the 20th to the 25th of August in 2016 at the prestigious Royal Dublin Society which has excellent congress facilities while being centrally located in Dublin.

The Congress Theme will be ‘Greening the Global Food Supply Chain’ through Innovation in Food Science and Technology.

Pingfan Rao at “Meet the Leaders of Today and Tomorrow” 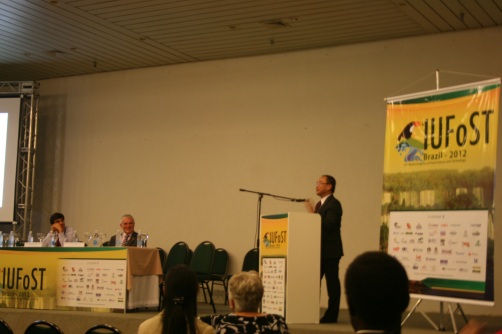 Pingfan Rao spoke in Sunday’s “Meet the Leaders of Today and Tomorrow” session about the importance of recognizing not only what your strengths and passions are, but also recognizing the areas that aren’t suited to you.

When he was in high school, Rao built his own TV, attracting neighbours for years who came to watch at his house.  He assumed he’d go the electronics route until taking his university entrance exams and finding out that he could get into any university in China. He was recruited to do a food packaging course at Fuzhou University and ended up developing a strong passion for food science.  After doing his PhD in Osaka, Rao returned to China where at the time, milk drinks were very popular.

He persuaded his colleagues to make a milk drink product, and turned his lab into a production plant. Despite it being a phenomenal success, he knew this was not for him.

“After 4 years I knew I was not a business person at all, that does not suit me,” said Rao.

Instead, he turned his focus to studying how food interacts with the body, and found his niche.

“In the future when we talk about how food can make you happy, how it can make you stressed, I think that one day it will be the ultimate human technology- the food science technology.”

Session chair and President of the International Union of Nutritional Sciences Ibrahim Elmadfa gave a talk on Wednesday titled Energy balance and diet quality in the control of obesity dealt with the often neglected part of the obesity equation- the energy expenditure side. Elmadfa spoke about how over time, caloric expenditure has decreased significantly.

“Neither fat nor carbs can alone explain obesity; it’s more the energy balance component that is responsible,” said Elmadfa. “We’ve had a wave of light products but if people habitually eat more of this, they’ll end up where they started; they will simply eat more. ”

“In my view, the first point should be to focus on the diversity of foods. To go for lower energy density foods. Meat or meat products are not to be avoided totally but you can consume of them less frequently, in smaller portions. Milk and milk products are very important to you, so we would never say avoid them but we would say take the low fat products and focus on this. The focus on fruits and vegetables has been neglected and I think we should make use of all the sources, fresh and dried, canned or frozen. The other point is to encourage performance of more and more often physical activity. This is something that we also have to think as a society and not leave it for the individuals.”

University of Minnesota’s Prof. Mary Schmidl spoke Wednesday about the issue of “Globesity,” a talk that centered around the question that everyone would like to know- who is to blame?

As to be expected, there are so simple answers. One reason is due to the fundamental changes that have taken place over time have altered the way we think about food. Food has been made cheap, everything is convenient, and we drive everywhere.

“Why not change the paradigm? Get kids to walk to the bus stop and then walk to rest of the way there!”

Schmidl spoke about how in the creation of public policies, economic policies are followed by agricultural policies, with nutrition policies coming in as a distant afterthought, instead of having the policies integrated.

So what’s the answer about who’s to blame? The truth is, it’s individuals, technology, schools, communities and public policies that are all to blame.

“It’s a social, cultural, scientific, and multi factorial challenge for us,” said Schmidl. “From the farm to the consumer to public health, food scientists are right in the middle. It’s the whole system working together that’s going to make a difference.”

A Word with the President of IUFoST

The President of IUFoST, Geoffrey Campbell-Platt was asked to make a statement on the theme of the Congress ‘Global Food Security and Wellness through Food Science and Technology’

We are all interdependent on food. Food does not recognize any national or regional boundaries. Ingredients are able to come from one country, to be processed in another country to then be eaten in a different country. So the more we educate Food Scientists and Technologists in higher education about consumer awareness the safer and the more secure the food supply we will all have. The idea of ‘Wellness’ is all about a balanced diet. It is about nutrients being available, from micronutrients to macronutrients. The world now has 7 billion people with 1 billion suffering malnutrition and on the other end of the spectrum another billion suffering from obesity. Our challenge is to distribute the food more safely and more fairly and to make sure we all have enough food to eat, or overindulge and create disease and health problems. That is the challenge for us all and that’s what we are addressing here in Brazil.

Industry leaders from around the world spoke Sunday about the challenges their respective industries have faced and how the food industry as a whole can work to achieve the common goal of improving food security.

Upon being asked about the sustainability of utilizing subsidies and other such price controls, Randy Giroux had this to say: “We look at products and ask whether they’re the types of products that can sustain themselves over time without price support. Some need short-term support, for example, we were supportive of credits for biofuel because this kind of thing takes time and a large capital investment. We want to see an end game, not perpetual support. The intention should be to make sustainable products. We have never been in a more unstable time in food prices in the long term. As a general comment, those price control systems distort price and result in people growing products they shouldn’t be growing, at prices they shouldn’t be sold at. We need to rely on farmers to do what they do best. We talk to traders who have been in the business for 30 years and these are unprecedented price swings that they’re seeing- the highest the prices have ever been. Not surprisingly, we’ll be importing corn to the US from Brazil for some of our meat production, which goes to show the shortage we’re dealing with. “

Education was another theme of the panel discussion, both at the farming level as well as for end consumers. Michael Knowles specified that educating the industry about water usage has become a priority because it’s one of the most wasted resources within agriculture.

“With regards to the importance of extension and public education, in the US we don’t focus on training farmers regularly,” said Randy Giroux. “But best practices don’t just apply to the US. At Cargill, we think of agriculture on a global scale. We lose tons of grain just in storage because farmers aren’t properly trained about using best practices.”

One audience member asked how companies could regain consumer trust after so much attention has been paid to outbreaks and other such scandals.

“As consumers become more aware of food security and safety, we all share the responsibility for educating them. In order to have consumers not misperceive what we’re doing, we need to provide sufficient information, and often the media are only interested in scandals,” said Diana Banati.

“So much bad science is being published- one of the problems is that the wrong information is getting out,” added Knowles. This problem is indicative of a need for greater communication between the food science industry and the public. Randy Giroux pointed out that Cargill often has a hard time finding food scientists equipped with the “soft skills” of being able to communicate their knowledge to consumers, and that this skill needs to be made part of the training food scientists receive.

Nigel Sunley from South Africa asked the leaders about the flipside of the sustainable coin- whether companies have a responsibility for sustainable consumption.

“We work with the WHO to market to appropriate age groups – with absolutely no marketing to those under age 12. Responsible marketing is vital to Coke,” said Knowles. “It’s important to note that we never advocate high consumption, but rather moderate consumption. We have a published policy on our website, and we ensure our marketing doesn’t stray from these policies and as such, Coca Cola invests huge amounts of effort and resources to mitigate obesity issue.”

Mary Schmidl from IUFoST brought up that the problem of food security now includes the simultaneous existence of having nutrient deficiency and caloric excess; that there are enough calories in the world  but rather that what is needed is sufficient nutrients.

“The issue of hunger isn’t about calories, it’s about providing the right nutrients at the right place at the right time,” responded Knowles. “There’s a difference between being hungry because people don’t have enough calories, and being malnourished.”

Winner of the Young Scientist Award – Dr. Cornelia Rauh from the Friedrich-Alexander University in Germany is one of seven Young Scientists to win the Award. Dr. Rauh also won the opportunity to lecture during the Opening Plenary where she discussed ‘Mathematical modelling, numerical simulation and adaptive control of processes in food and biotechnology.’

These Young Scientists had to meet the criteria of:

The other Young Scientists to win this award are:

Congratulations to all the winners!

“One of the objectives of IUFoST is to provide opportunity for education and training to all professionals engaged in providing a safe, nutritious food supply to consumers. To that end, the IUFoST Distance Education Task Force developed a Distance-Assisted Training Programme. This programme is aimed at those involved in any way with the growing, production, processing, marketing, distribution, or preparation of food products who do not have formal training in food science and technology and desire to advance their career and enhance the quality of the food supply.

The programme is delivered to a participant through a local mentor (usually someone with an advanced degree in food science and technology or considerable industry experience).”